PLIERS
Pliers are designed to hold, turn and cut objects. Pliers vary in length from 4" to 20". Some pliers are available with factory applied, plastic-coated handles, providing an attractive appearance and comfortable grip. However, these pliers should not be relied on for electrical work.

A. Pliers fall into two broad categories : solid-joint and slip-joint, either of which may have cutters.

Slip-joint pliers are of two designs : multiple hole and tongue and groove. The slip or adjustable joint enables the tool to adjust to the size of the object being held.

Solid-joint pliers have a joint fixed with a solid pin or rivet and are not adjustable.

Cutting pliers can be side, end or diagonal types. Side cutters have a cutting blade on one side only and are available in long-, curved- and short-nose types. End cutters have cutting blades on the end and are used to make sharp, clean cuts close to the surface on wires, bolts and rivets. Diagonal cutters have two cutting blades set diagonally to the joint and/or handles. Some cutting pliers are made with a spring in the handle to open them automatically after each cut, providing ease and comfort for the user.

B. Other pliers commonly found in home improvement stores include:

Thin jaw slip-joint pliers ; Like slip-joint, but made with a slim nose to reach into tight places.

Multiple slip-joint or box-joint pliers ; General utility tool with up to eight adjustments, allowing for jaw openings up to 4-1/2", either multiple hole or tongue and groove. Straight and curved jaws are available. Most common is 10" water
pump pliers.

Needle-nose pliers ; Also called longnose pliers, they have a pointed nose for reaching places with restricted clearance. May have side cutters. A standard item for most electrical and electronics work.

Thin-nose pliers ; Also called bent-nose pliers, since the nose is bent at about an 80-degree angle for reaching around
objects. Duck bill pliers — have long, tapered, flat noses for work in restricted areas. Used by jewelers, telephone workers and weavers. 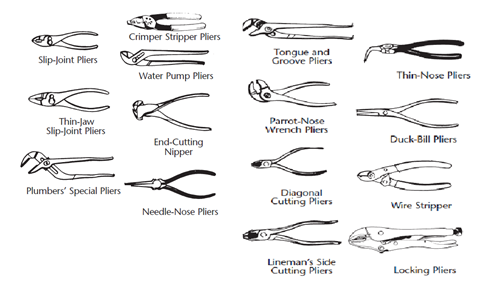 Related For Types of Plier

Screwdrivers are generally classified as slotted, Phillips head or

A wrench’s main function is to hold and turn