Braking force and the tendency of the wheels to lock up are affected by a combination of factors such as the friction coefficient of the road surface, and the difference between the vehicle speed and the road wheel speed. The ABS prevents the road wheels from locking up during heavy braking by controlling the vehicle’s brake system hydraulic pressure. 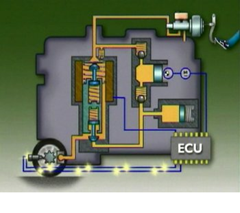 During normal braking, as the rotational speed of the wheel falls, no electric current flows from the ECU to the hydraulic unit. The solenoid valve is not energized. The brake master cylinder hydraulic pressure is applied to the brake unit, and the ABS is not involved. However, even though the ABS is passive during normal braking, its control module is constantly monitoring for rapid deceleration of any of the wheels.

If a wheel-speed sensor signals severe wheel deceleration – which means the wheel is likely to lock up – the ECU sends a current to the hydraulic unit. This energizes the solenoid valve. The action of the valve isolates the brake circuit from the master cylinder. This stops the braking pressure at that wheel from rising, and keeps it constant.

If the wheel sensors indicate that lowering the brake pressure is letting the wheel accelerate again, the ECU stops sending current to the hydraulic unit and de-energizes the solenoid valve. This lets the pressure increase, so that the wheel is again decelerated.

This cycle repeats itself about four to six times per second.

It is normal in an ABS for the valves in the hydraulic control unit to keep changing position as they change the brake pressure that’s being applied. These changes in position may cause rapid pulsations to be felt through the brake pedal.

Related For Principles of ABS braking